Spatial awareness is quite commonly tested in psychometric tests, aptitude tests, pre-employment tests and admission tests spatial awareness questions are quite common. They serve as a measure for your ability to mentally re-arrange objects without physically touching them.

An overview of the the most common spatial tests accompanied by additional information follows below.

Spatial intelligence typically consists of two main abilities namely spatial visualization ability, which is your ability to imagine or visualize spatial images in your mind and spatial reasoning, the ability to mentally manipulate and reason with these images.

There is however, compelling evidence that people can improve their spatial abilities with practice and the most common practice methods are discussed below.

The classic spatial reasoning test involves mentally rotating shapes and objects as a measure of one’s spatial intelligence. Take a look at the following two shapes, are they different? Or are they just differently orientated? 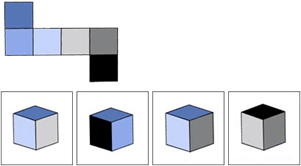 A lot of these type of questions can be found on our spatial reasoning test page.

In this kind of spatial reasoning tests several ‘cut-up’ shapes will be shown and you will have mentally to re-arrange the shapes so that it matches one the designated shapes. Below is an example of an organizing shape test question at the courtesy of JobTestPreb.

These type of spatial reasoning tests practice tests with detailed tips and explanations are available at Jobtestprep.

In other spatial awareness tests the you have to choose a mirror image of a shape after it has undergone a spatial change. Below follows an example at the courtesy of JobTestPreb.

These type of spatial reasoning tests practice tests with detailed tips and explanations are also available at Jobtestprep.

Another type of question, however fairly uncommon, is making a mental model based on textual information. Below follows an example.

What is the relationship between A and B?

Why is spatial intelligence important?

Spatial reasoning is essential for solving everyday problems such as how to use a map to guide you trough a location when on vacation, or to orientate yourself in a new city, parking your car, playing 3D games, or predicting where the ball is going to land during ball games, such as basket ball, football soccer, tennis, all these involve spatial reasoning.

Other more common examples are determining the size of a box and how many items could fit in that box, or when looking at your mirror image in the mirror and still be able to comb your hair. Spatial reasoning is a very important and powerful problem solving tool and are therefore often tested during selection processes.

For instance, an architect has to visualize a 3d spatial orientation when designing new buildings, and must be able to transfer this mental image into a 2-dimensional drawing.

Good chemists must be able to translate abstract 2D chemicals formula’s into the correct 3D molecules with different spatial orientations. This is especially important when it comes to molecules with mirror images (called chirality), because one can be a medicine while the mirror can have serious side effects. 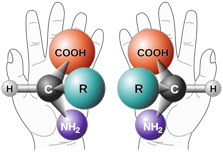 An engineer has to be able to visualize the synergy of the individual parts working together in a machine in order to solve problems. Medical doctors must be able to interpret an X-ray image. Astronomers must visualize the arrangement and motion of the planets in solar systems and the list goes on.. Having a good spatial ability is therefore very important for success in many of these technical careers.