On this page several types and examples of abstract reasoning questions in aptitude tests are given and explained.

In this problem you’ll get a sequence of several figures and you’ll have to find the next most logical figure in the sequence. In the given sequence a pattern is present which you’ll have to find. By recognizing this pattern you’ll be able to choose the right answer from the presented options. For example: 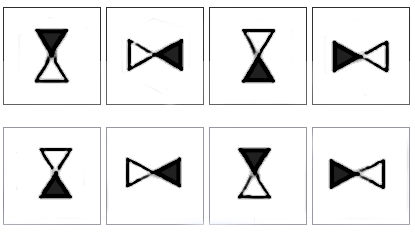 To solve a problem as shown in the example above, you should first try to find the pattern in the sequence of figures. In this case there is an hourglass shaped figure which is rotated clockwise by 90 degrees every next figure. This means the correct answer should be C. These kind of problems and the classify figure to fitting set problems ,which are shown below, are the two abstract reasoning test question formats, you will probably encounter the most.

In this question there is one image (above) and two sets of images (below). You need to match the image above with one of the sets of images below. To solve it you’ll first have to find the common characteristic of both sets. 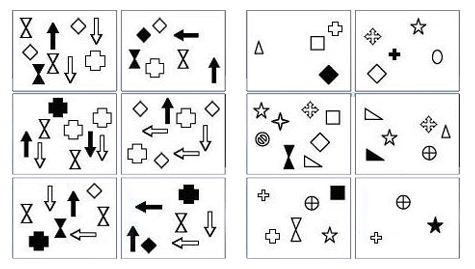 In the left set there is a black arrow pointing upward in every figure and in the right set shapes only occur once in every figure. The figure you have to characterize to one of both sets has a black arrow pointing upwards and there are several shapes used more then once in the image which leads to the conclusion that the figure has to be classified to the left set or set A. These kind of problems and the “figure sequences” problems ,which are explained above, are the two abstract reasoning test question formats, you will probably encounter most.

Fill up the blanks

In the fill up the blanks abstract reasoning questions. You’ll have to fill up the blank figures in a set of figures by choosing the most logical answer(s) from several given options. The correct figure can be found by looking at the relation between the other figures in the set. It is more or less an expanded version of figure sequences. Below a simple example is shown: 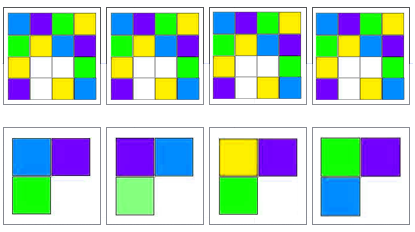 To solve the problem shown above you’ll first have to derive the relation between the complete pieces of the set. Now it seems that all colors are used once in every row and once in every column so this makes answer A the correct answer.