Get logical reasoning tests that employers use with detailed tips and explanations at JobTestPrep.

Venn diagrams show all possible and hypothetically logical relations between a collection of finite and infinite statements. By means of an overlap between some certain assumptions conclusions can be made using the (in)finite statements. Two examples of the use of Venn diagrams will follow to clarify the above.

To check the validity of this statement first the different terms are appointed.

We will start with the first out of the two given statements from above. The first thing to do is draw two circles and write the terms Canadian and Right handed in them. The circle with the word Canadian without the overlap represents only Canadian people, while the part within the overlap with the right handed circle represents all Right handed Canadian people. Everything outside these two circles represents everything not connected to these two terms. With this one can think of plants, animals, cars but even you and me.

Next, the 1st statement claims: all Canadians are right handed. Thus this means that all Canadian people outside the overlap of the two circles are not involved in this statement, since they are not connected to the term right handed. As a conclusion of that this part of the circle is being shaded.

Subsequently the 2nd statement is reviewed. According to this statement all right handed are opticians. This statement can be solved by drawing two circles and again shading everything except the overlap in the right handed circle, just as was done with the first statement.

Linking the two statements and the circles together results in the Venn Diagram of figure 2. Here both the first (red) as well as the second (green) statement are displayed. The overlap between Right handed and Optician is clearly shown, even as the absence of one between Canadian and Opticians. Further it can be noticed that there is a small area where all three term are overlapping, a part which is still present. 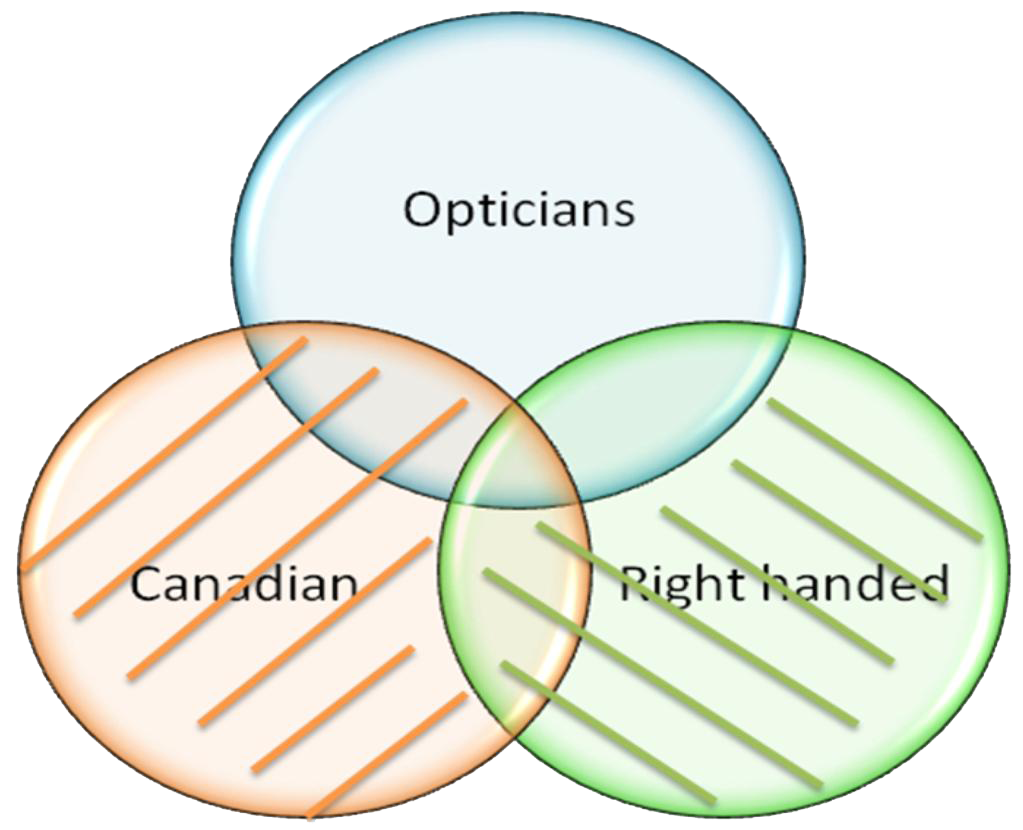 This case is characterized as a valid reasoning, since the conclusion can be drawn directly using the Venn diagram. It is however also possible that additional information is needed in order to check the validity of the conclusion. In that case the reasoning is invalid.

It is possible to assign a subject, predicate and middle term for all the statements. However, this would take lot of unnecessary time. Choosing between four statements when solving syllogisms can be handled best by making a Venn diagram straight away. In that way the possible answers from the statements can be checked on their validity piece by piece, resulting in the correct statement.

First statement 2a will be examined. The method behind drawing this part of the Venn diagram is exactly the same as the one explained in example 1, resulting in figure 3.

In this way the first part of the Venn diagram displays that all hamburgers are meals, since the part with only hamburgers is shaded to result in the overlap area between the two terms; hamburgers and meals.

Next statement 2b is examined. This statement needs a different approach since the statement claims the following: some cows are hamburgers. This means that it is not possible to just shade a whole area as was done before.

Linking the two statements and the circles together results in the Venn Diagram of figure 5. With the help of this Venn diagram the 4 statements can be checked for their validity.

However it can be seen that the term meals has an overlap with both hamburgers as well as cows, meaning that both are possible en thus resulting in an invalid statement.

It can easily be concluded that this statement is incorrect, since an overlap is present between these two terms.

Be aware of the rank of the terms. It was already suggested that some cows are hamburgers, but nothing is stated between the relation of cows and meals. In statement 2 the rank was different so conclusions could be made, which in this situation is not the case.

In this example the correct answer is statement 2. Most syllogisms can be solved by using the above manner. The trick by solving syllogisms is often correct reading and interpreting of the statements and conclusions for obtaining a valid reasoning.

Get logical reasoning tests that employers use with detailed tips and explanations at JobTestPrep.